Be honest, how many books on that shelf have you actually read cover to cover? 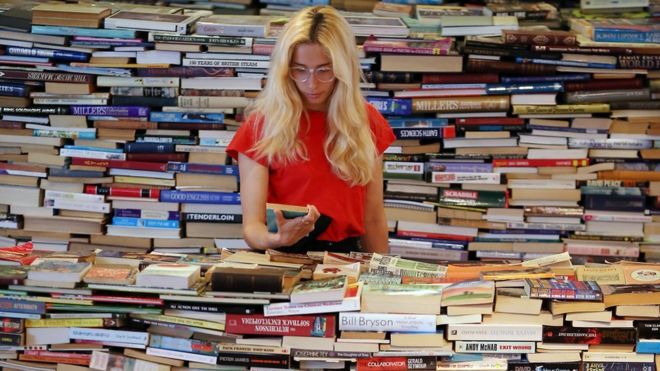 Does this sight look familiar to you? Photo from Getty Images.

Do you have a habit of picking up books that you never quite get around to reading?

If this sounds like you, you might be unwittingly engaging in tsundoku – a Japanese term used to describe a person who owns a lot of unread literature.

He explained to the BBC the term might be older than you think – it can be found in print as early as 1879, meaning it was likely in use before that.

The word “doku” can be used as a verb to mean “reading”. According to Prof. Gerstle, the “tsun” in “tsundoku” originates in “tsumu” – a word meaning “to pile up”.

So when put together, “tsundoku” has the meaning of buying reading material and piling it up.

“The phrase ‘tsundoku sensei’ appears in text from 1879 according to the writer Mori Senzo,” Prof. Gerstle explained. “Which is likely to be satirical, about a teacher who has lots of books but doesn’t read them.”

While this might sound like tsundoku is being used as an insult, Prof. Gerstle said the word does not carry any stigma in Japan.

Another Word for Bibliomania?

Hands up if you regularly used the word “bibliomania” before reading this article.

Bibliomania is the title of a 19th Century novel by Thomas Frognall Dibdin which claimed to explore “book madness” – the act of being unable to stop collecting literature.

By his definition, those afflicted with bibliomania were obsessed with unique books such as first editions and illustrated copies.

But two centuries later, the term would no longer be about obsession – according to Oxford University Press, it has been shifted to “passionate enthusiasm” about collecting.

But you might argue both are more generally described by a variation of the distracted boyfriend meme.

Does It Only Work for Books?

Strictly speaking, the word doku does mean reading, so tsundoku should probably only be used when discussing literature.

But you might not be surprised to know some people have applied the term to other aspects of their lives.

In a popular post on Reddit’s community dedicated to books, people discussed how this term could explain their relationship with films, television shows and even clothing.

One of the most popular interpretations concerned video games, with various people referencing their “vast, untouched software libraries” on game distribution platforms like Steam.

And some people even joked the service should rename their annual week of discounting the “Steam Tsundoku Sale”.

But credit to Ronnie Filyaw of Whomp! comic, who came up with this concise definition: