In defence of the much-maligned reference book. 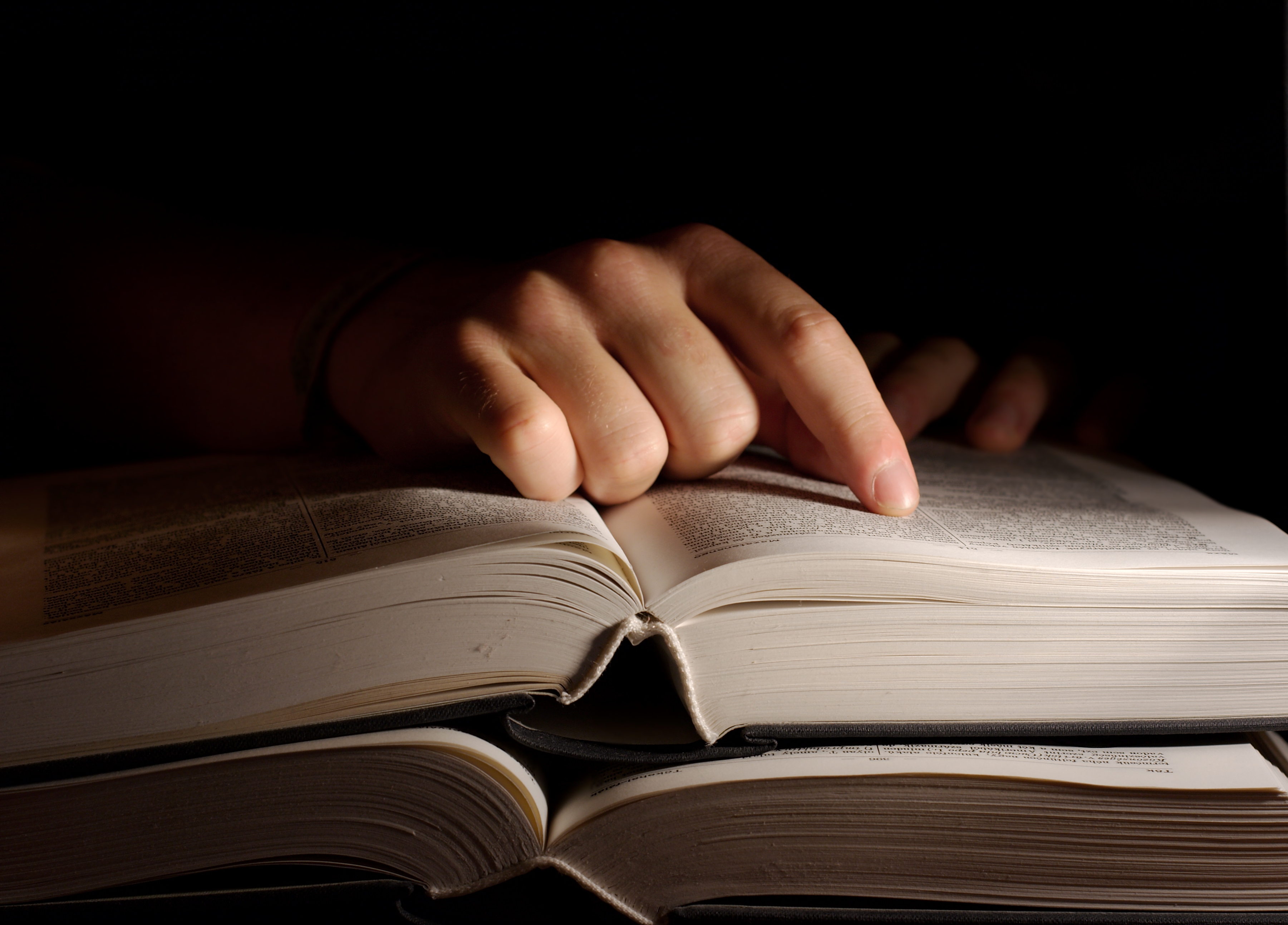 As reference books go, the thesaurus, these days, is one step up in respectability from the rhyming dictionary. To use one is to betray something embarrassing about yourself. To be accused of using one is to be accused both of pretentiousness and of using words whose meaning you don’t really know. (For instance: I originally wrote “accused of malapropism” in that previous sentence, but then checked the dictionary and discovered this refers to mistakes based on sound.) One goes to the thesaurus to find, as they say, a “ten-dollar word.”

Perhaps the best example of this sort of condemnation comes from Simon Winchester, the author of a book about the Oxford English Dictionary, who once wrote in The Atlantic that Roget’s Thesaurus “should be roundly condemned as a crucial part of the engine work that has transported us to our current state of linguistic and intellectual mediocrity” and concludes that it provides “quick and easy solutions for the making of the middlebrow, the mindless, and the mundane.” Or, by way of a more recent (and certainly more mild) example, from The Morning News’s “Tournament of Books”: “Milkman seems to be overly occupied with its own style, its difference, and its reliance on a thesaurus…to notice that the poetry to justify that stylistic occupation is simply absent.”

This set me back on my heels for a moment. I know what this kind of quip means. But what is it saying? Milkman, a book I am currently reading, does not strike me as ambitious on the level of vocabulary. (At one point the narrator voices a complaint about a teacher who uses the words “fugacious” and “crepuscular.”) It’s also the kind of book that, thanks to its subject matter — female experience of male violence in Northern Ireland — you sort of expect to have recommended to you as a way of “getting the Northern Irish experience.” Such a reader would not be prepared for the skittering, looping quality of the narrator’s observations, her sharp prejudices, what she expects and what she doesn’t expect, the frequently bizarre dialogue, and the book’s sense of humor.

So Milkman is an ambitious book in other ways — in its voice, for instance. The thesaurus dig makes this ambition more about looking like a try-hard. To substitute one synonym for another.

If a thesaurus can be a trap for the unwary, who don’t realize the next step after browsing a collection of words is to go look those words up in a dictionary, this seems like a problem with a one-time solution.

As originally conceived, Roget’s Thesaurus was a slightly different sort of book than the kind of online thesaurus one might consult today. It was instead a fairly rigorous if idiosyncratic taxonomy of language. And it was not a book of synonyms, such books already existed. Synonyms, in terms of words that can be completely substituted for each other, are fairly rare. “Inferiority,” “minority,” and “subordinacy” might all be related words, but they carry slightly different meanings. “Sunset,” “dusk,” and “twilight” all encompass roughly the same time of day, but each has a different tone. So Roget called his book a “thesaurus,” or treasury. He was showcasing and organizing language, not simply providing lists of matching words.

When I was a teenager, I used my thesaurus for exactly the kind of excruciating thing that people are thinking of when they single it out for scorn: Tolkien-esque poetry (sorry, “lays”) and looking up synonyms for the word “said” for my very long, assuredly brilliant fantasy epic (sadly lost to time). I didn’t particularly need a thesaurus to learn new words or think about the kind of shades of meaning this or that word implies or how words relate to each other, but having one around was part and parcel of growing up in a bookish home, the kind where there was never such a thing as enough bookshelf space. If I was using ten-dollar words, I had ten dollars to spare, and then some. New words were all around me.

And, also, I was a child. I was learning how to use language by making mistakes. Similarly, the imagined “bad user” of the thesaurus is often a student who visits the resource to punch a paper up a little. But of course students will overreach and make mistakes in their papers. Ideally, they do make mistakes, because papers are not high-stakes or public-facing compositions. They’re tools to find your voice, learn how to craft an argument, how to structure information, and, yes, how to play around with language.

In Winchester’s article, he notes that one student changed “his earthly fingers” into “his chthonic digits,” which I’d agree is pretty dreadful. But that error is easily corrected, and that student presumably gained the word “chthonic,” which if nothing else is a fun word to know. Just look at it there, announcing itself with an improbable collection of consonants. And if a thesaurus can be a trap for the unwary, who don’t realize the next step after browsing a collection of words is to go look those words up in a dictionary, this, again, seems like a problem with a one-time solution.

But the alternate problem is that people are too afraid to test new words — even words that are correct, but obscure — because they are afraid of seeming foolish and they either stay within the bounds of a safe vocabulary or (if they are a certain business-managerial type) cope by inventing hideous new words. Fear of the thesaurus has unleashed horrors a Chthonic god could only dream of, like synergy and incentivize.

This seems to me to be a worse problem, not only because people do learn by making mistakes, but because the sphere of “correct,” accessible English will only get smaller and smaller. Such a state of affairs will not correct language slippage, but it will make English much more boring. One reason people are drawn to the English language writing of people whose first language isn’t English, like Joseph Conrad or Vladimir Nabokov, is because their approach to the language can feel more excited about its potentials than that of people who have been living inside English all their life.

To be clear: I am not somebody who is particularly patient about English errors. I still insist that “begs the question” should not ever be used in place of “raising the question.” I have very little time for ill-conceived metaphors. But I don’t blame the thesaurus. I blame not thinking about what you’re saying, which you can’t reasonably expect any reference guide to prevent. At least somebody who looks up a word in a thesaurus is putting a little work in.

There’s a final reason to praise the thesaurus, which is that it preserves an element of serendipity. The internet has mostly made the reference book obsolete. I visited two bookstores looking for a thesaurus, and while the reference shelves still had a dictionary or two, that was about it. Their digital equivalents offer convenience, even if they aren’t necessarily as good as the resources they’re supplanting. And while I do have nostalgia for the days when Sigmund Freud would write entries on psychoanalysis for the encyclopedia, websites like Wikipedia do tap into the strengths most internet-active people have to offer: a surplus of weirdly specific knowledge and a love of explanation.

And what this means is that the internet has often been great for me, because I usually am looking up things in a targeted sense. The whole phenomenon of the Wikipedia rabbit hole can attest to how fun it can be to pursue a single chain of associations. But it also means the internet is bad for somebody who is coming to all this information without knowing the questions that they need to ask. The decline of the thesaurus is similar to the kind of loss that you experience when you visit a digital resource rather than the library. Browsing the stacks, you are struck with the multitude of books within a particular category. You go looking for one thing and come out with the book you didn’t know you were looking for. Much like a thesaurus, somebody often has to teach you how to use the classification system in the library for you to get the most out of browsing there. But what you get out of browsing really is something qualitatively different than you get from searching a library catalog.

What a thesaurus gave to people was the ability to see words not simply as isolated bits of vocabulary but as parts of a bigger way of thinking and associating ideas and meaning. Language could be exciting. Language could have ideas lurking in it you never even knew were there. Language was grand, dignified, sublime, majestic; vast, immense, and enormous. To the idea of the ten-dollar word, the thesaurus says: really, there is no such thing as a budget for words. There’s no language austerity. Go ahead and spend. This is all yours, and it’s not running out. B.D. McClay is senior editor of the Hedgehog Review.